I was so excited when I saw that my first Fix arrived this afternoon. 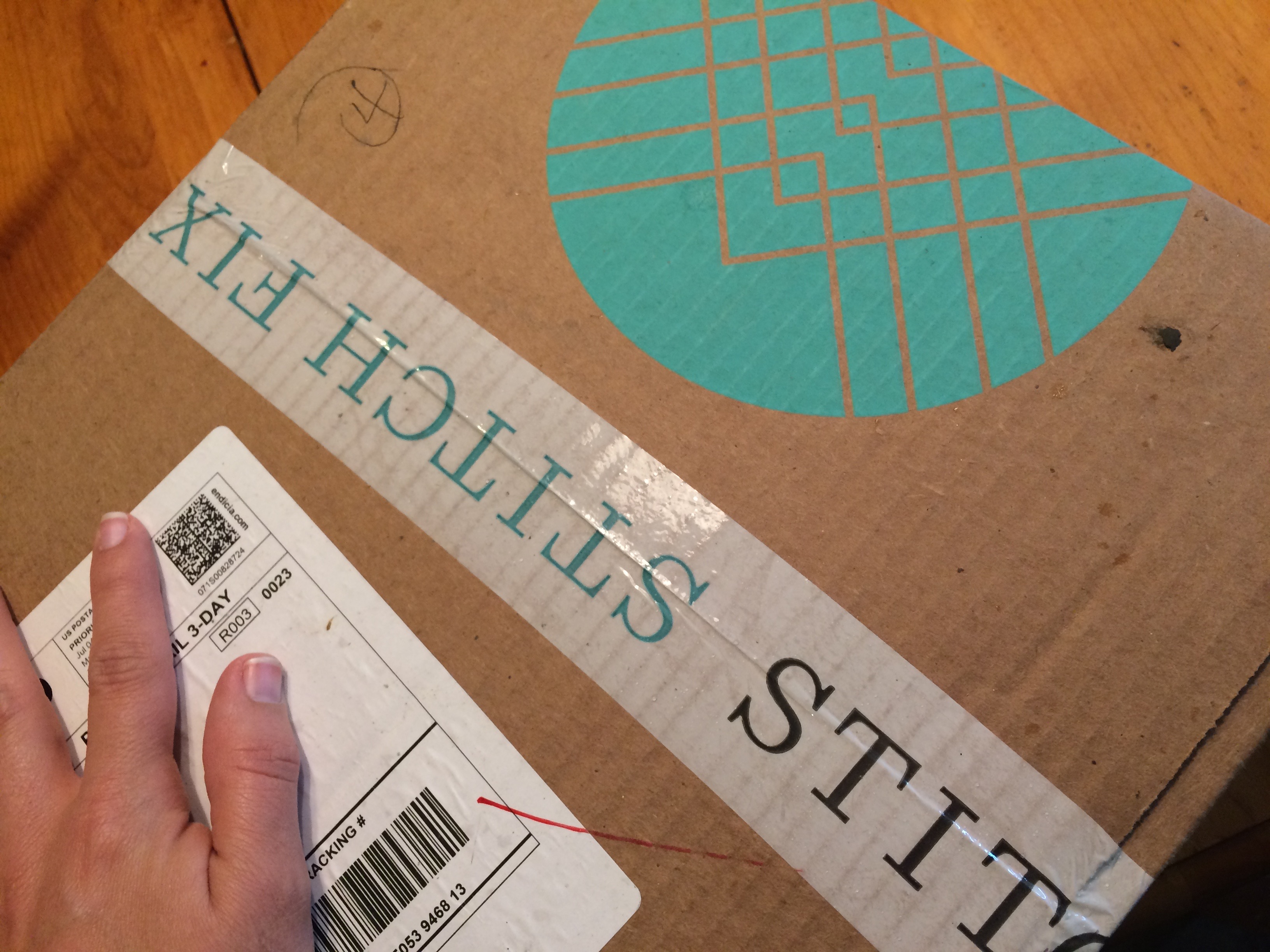 Naturally, I got it and brought it back to the office where three of the most stylish (and honest!) ladies I know could give me their thoughts. 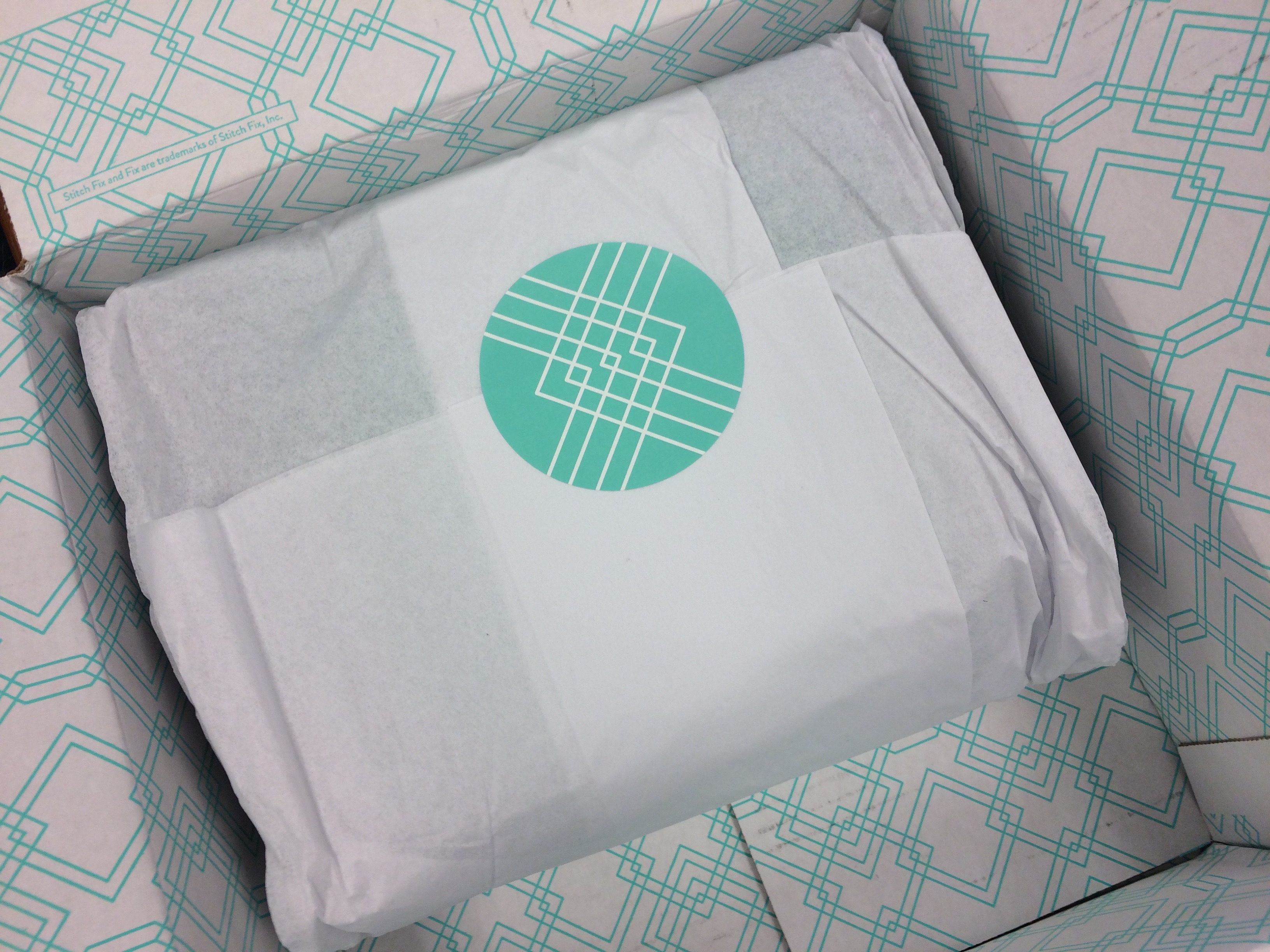 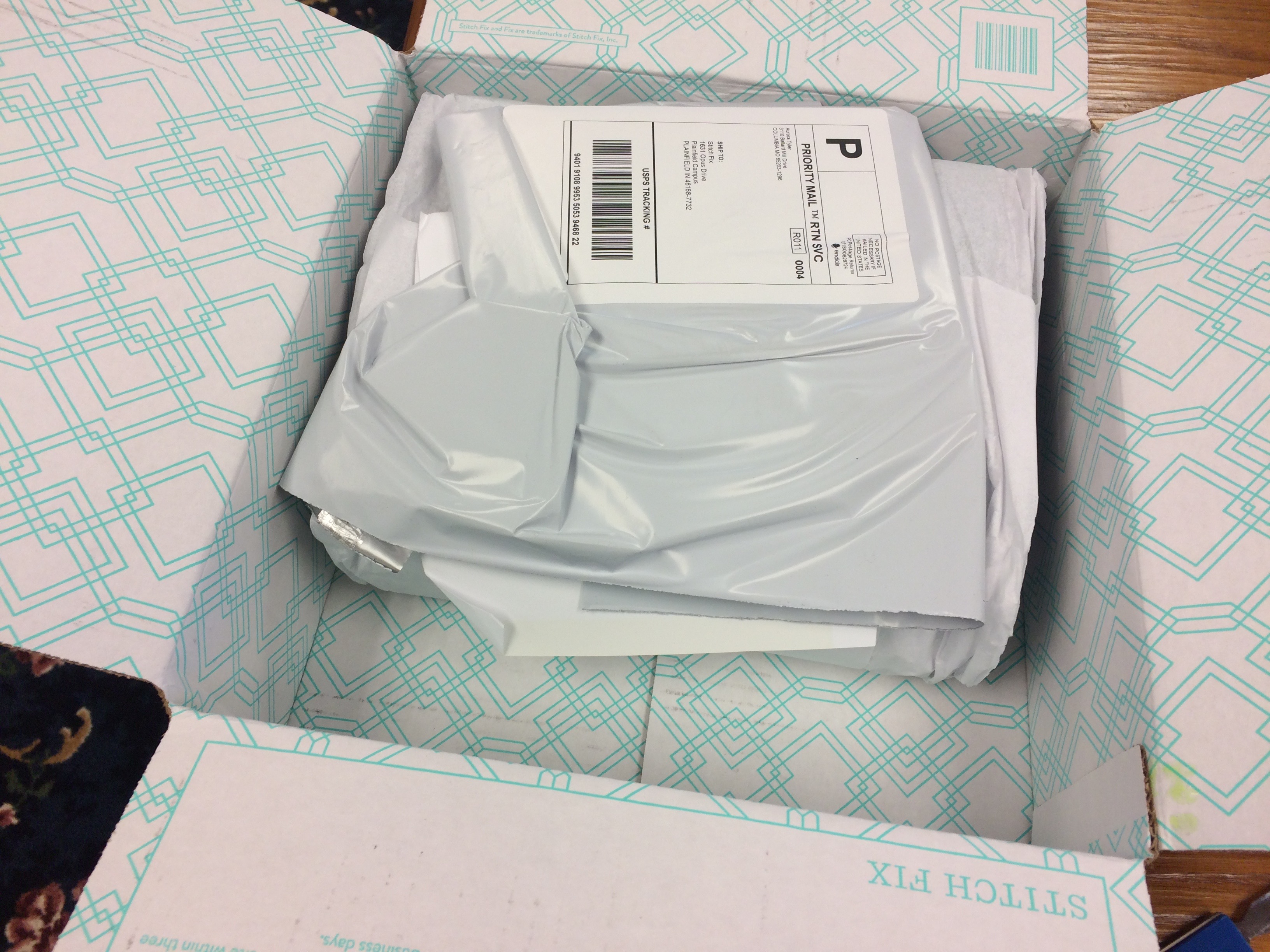 First thoughts: I said no blue and no crew necks. My closet overflows with blue. In general crew necks don’t flatter me. Two of the three shirts are crew necks and everything in the box was a shade of blue. I also said I was looking for office business casual and my stylist sent distressed jeans. Though the jeans fit like a dream, I really can’t justify $78 for distressed jeans that I can’t wear to the office. Three of the four shirts were super see-through, which is also not appropriate for the office.

Then, I tried everything on. I wore the Kut From the Kloth Kate Distressed Boyfriend Jean in all of the looks. I did not expect the jeans to fit, but they were some of the most comfortable and flattering jeans I’ve ever tried on, despite being a teensy bit too long.
Jean verdict: Debated, but ultimately sent back. 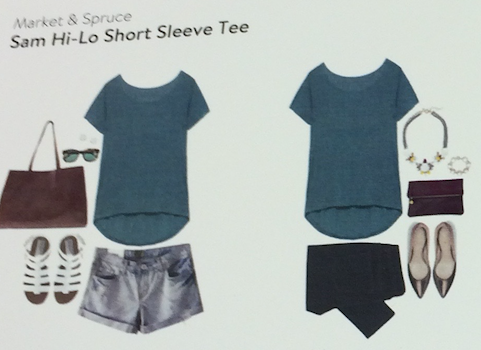 Opinion: I actually already own a very similar shirt. Two in fact – one from my maternity wardrobe and one regular.
Veridict: Sent back. 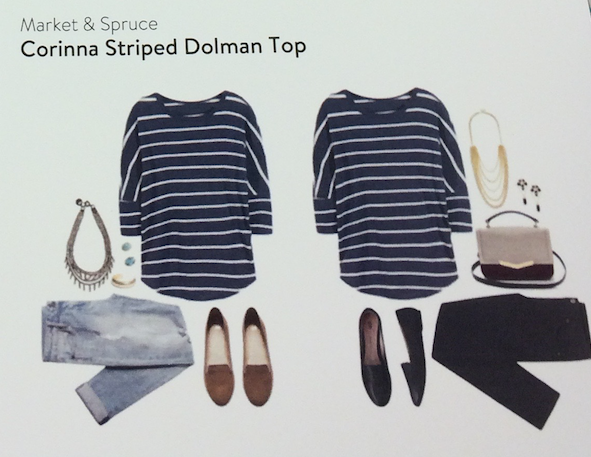 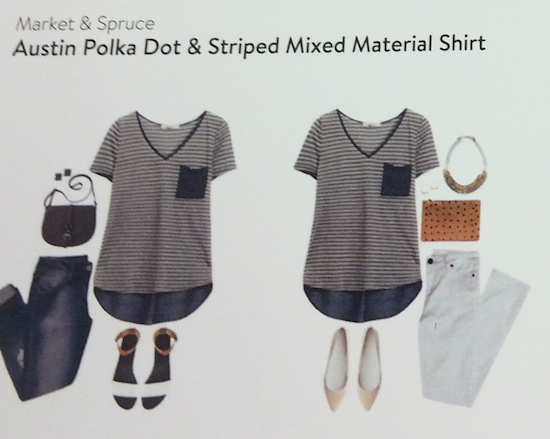 Opinion: This shirt was practically see through, but with a tank ended up being a lot cuter than I expected. I have a general rule to never wear shirts with pockets on the chest because they tend to emphasize an area I would like to deemphasize. If it didn’t have the pocket, I would have probably kept the shirt. However, one of my stylish coworker did say this looks a lot like a top I could get off the rack at Old Navy, which is true.
Verdict: Debated, but ultimately sent back. 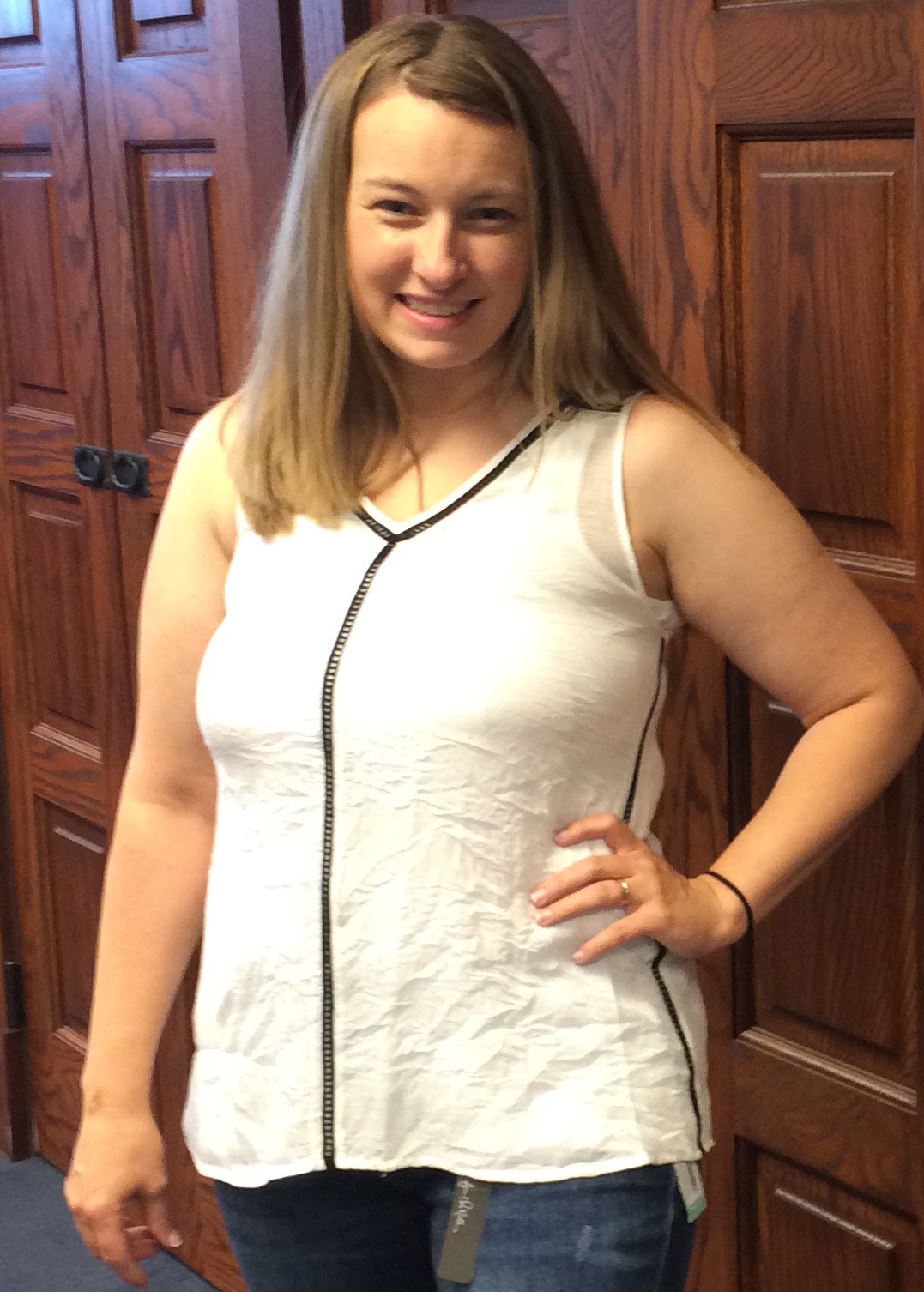 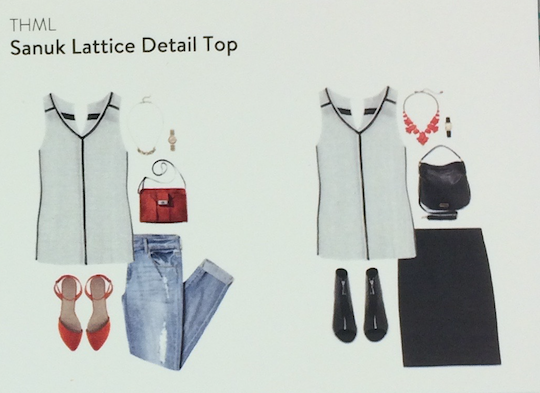 Opinion: I rarely wear tank tops alone. The piping on this just hit me at all the wrong places. I couldn’t take this off fast enough. The length was the only good thing about this shirt.
Verdict: Sent back.

Final thoughts: Part of why I went with StitchFix is because I don’t really have time to shop and because I wanted to get some new items in my wardrobe that people around town won’t also have. Turns out two of my five items arrived in a friend’s May box and she kept them. So at least one other person in my town would have the same items. Actually, one of my stylish coworkers commented that she thought I got her box because nearly all of the items looked better on her than they did on me!

I had high hopes for my first box, but they didn’t materialize. I’ll give Stitch Fix another try and see what they send next time. Want to try Stitch Fix for yourself? You can use my Referral Code and I’ll get $25 toward a future box and you’ll get my gratitude!