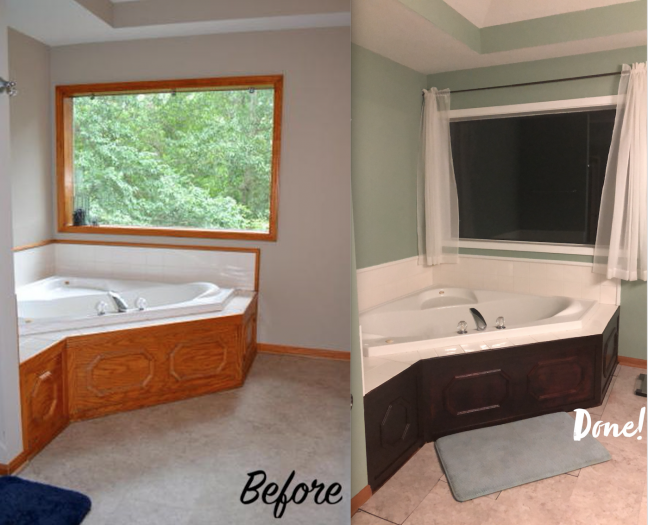 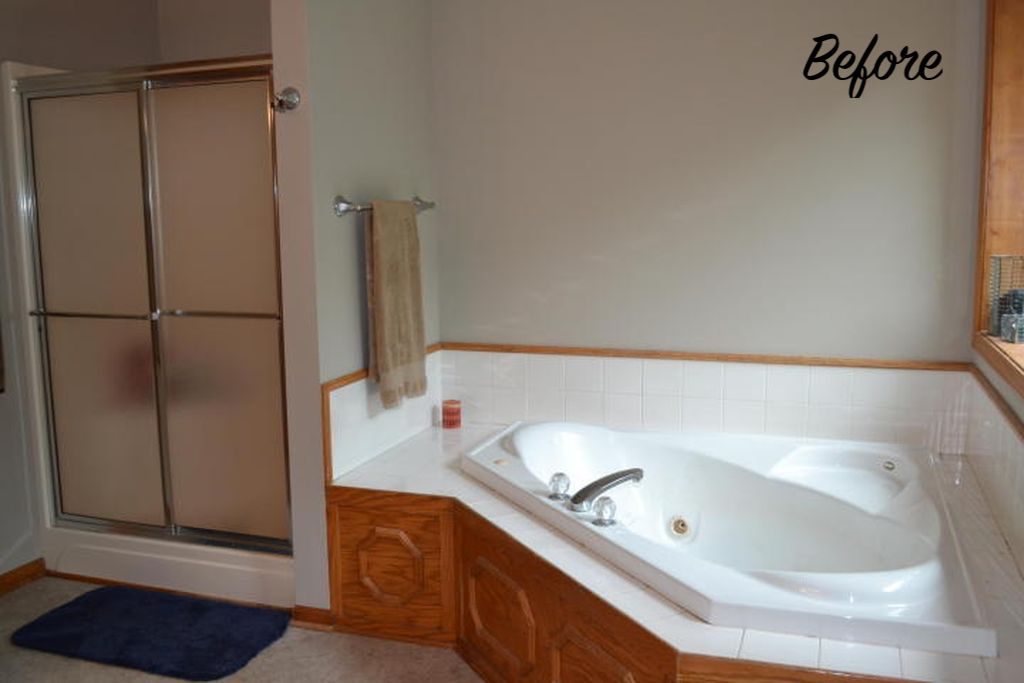 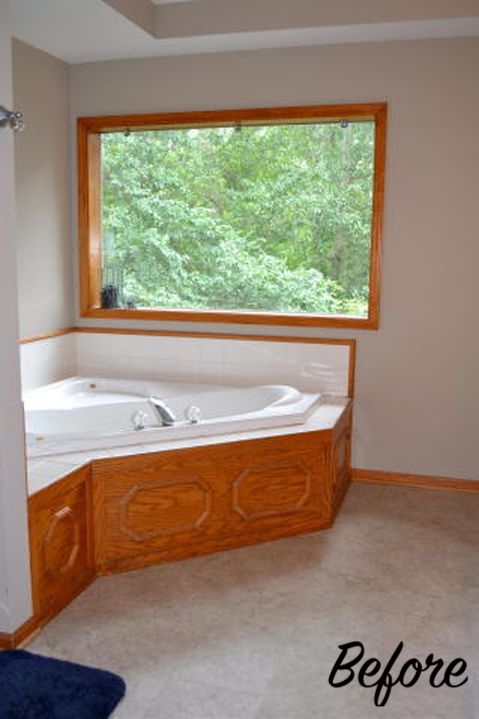 When we moved into our house in fall of 2015, we knew the bathrooms were quite “dated.” We did not know the vanity in the master bathroom had extensive water damage, mold (!!!) and the new floor the previous owner installed was done so poorly it buckled shortly after we moved in.

What started as a plan to just replace the rusted drawer slides soon turned into an entire project. 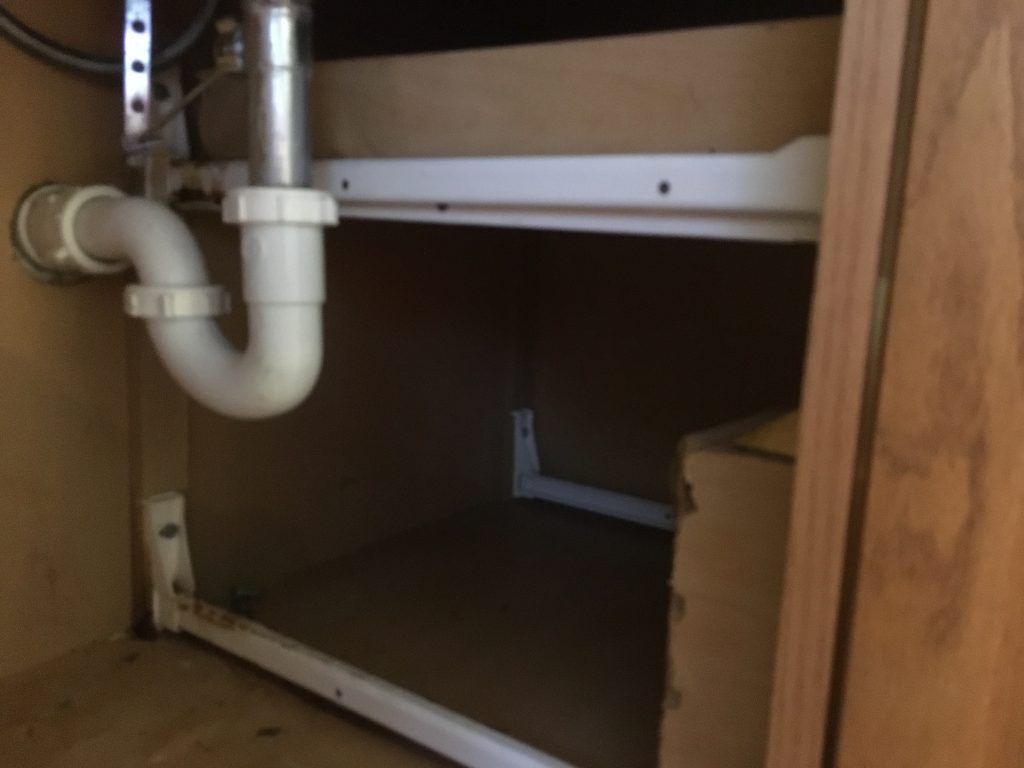 That’s rust on the back wall and both drawers didn’t slide because the particle board had swelled and molded. I thought we might just be able to buy new drawer boxes in the right size but now where in town sold them and the priced online were much more than we wanted to pay since we would someday completely replace the vanity.

I got for Christmas made our own. If you are planning to buy one, you might want to check out this huge article with the basic features of a miter saw.

Making the drawer boxes ended up being slightly more challenging than we thought it would be. We measured several times, cut once and built the boxes. We added the plywood to the bottom and added the new drawer slides. One drawer fit perfectly, the other one just didn’t. After a few trials and errors and stripped screws, we took the whole thing apart and made some additional adjustments. Only then did it work! 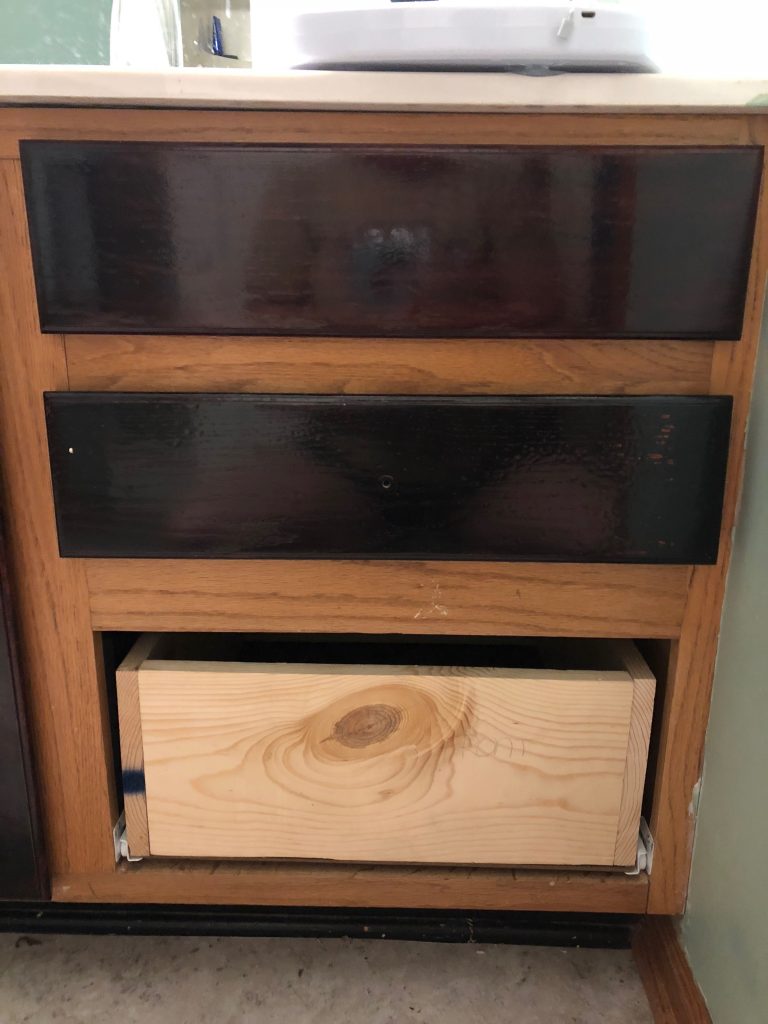 At the same time, we were building the drawer boxes, I tested a stain we’ve used several times before with good luck on the drawer fronts.

I knew we would need to stain the vertical surfaces as well and tried the spray version of the Minwax Polyshade.

It worked but the overspray was going to be too much to use in the bathroom and I needed to find an alternative for the vertical surfaces. That’s when I tested the Minwax Gel.

I didn’t exactly follow the directions. Instead of staining it, letting it sit and wiping it off, I let the gel cure onto the wood instead of wiping it off. The wood grain does still show which is also what I wanted! 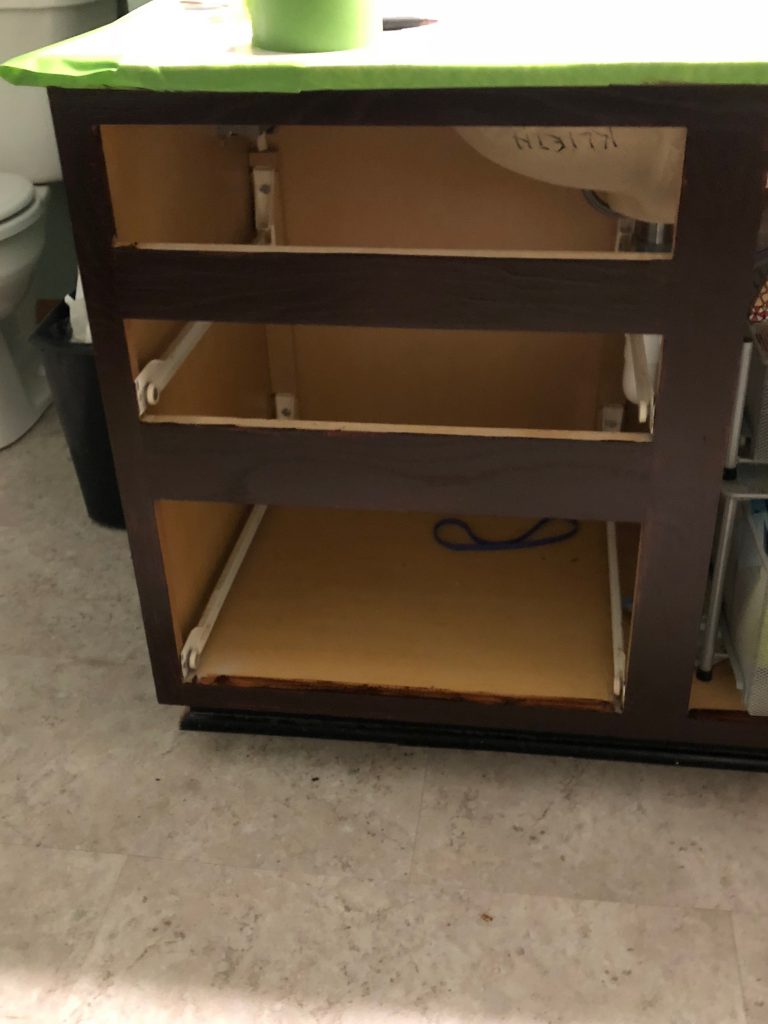 The next step was to stain the jetted tub apron. Since the floor was already bubbled and coming up, I took up the parts around where I would be staining. We knew the original linoleum was underneath, but we did not know the previous owner didn’t even clean the floor before putting the floating floor down. It was so gross and covered in sequins. I tried to ignore that part. 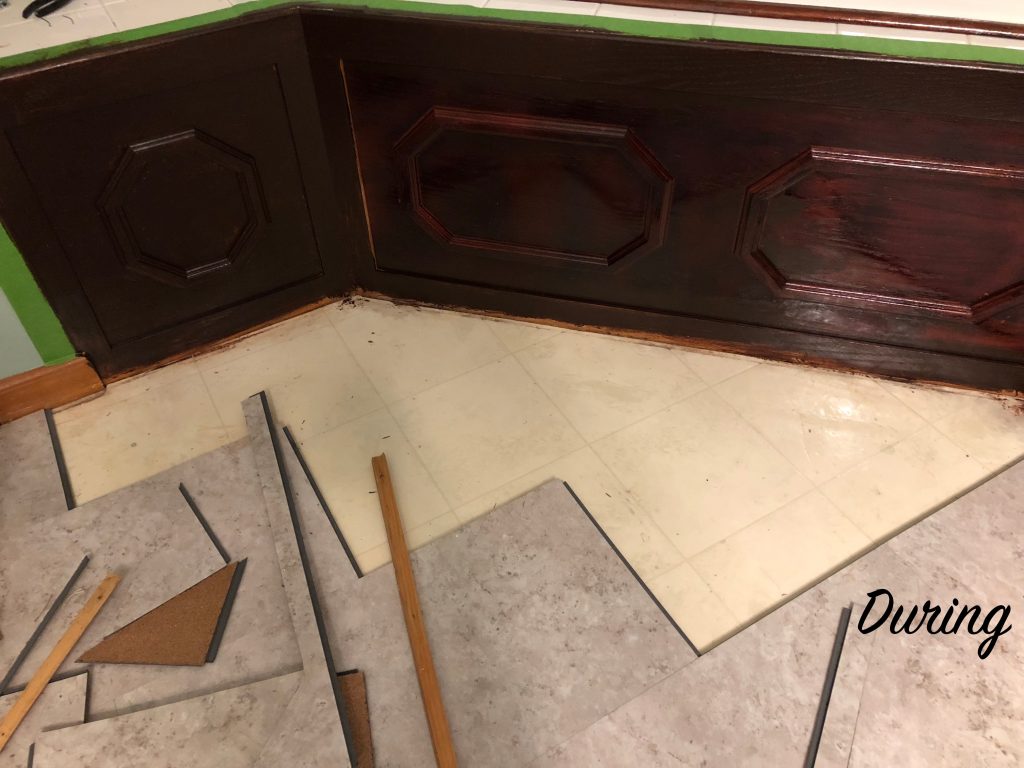 Even with keeping the gel stain on and letting it cure, we still had to use two coats.

The next step was to paint the trim and the window trim white. For this we used the Sherwin Williams snap dry white semi-gloss because it dries in an hour (or less). Of note, you might think the blue tape is as good as FrogTape but it is not. Spend a little more on the FrogTape, it is worth it, I promise.  There are a few techniques that are really important for painting a window you don’t want to paint shut (as the previous owner did to every other window in our house). First, cover the lock with FrogTape very carefully. Second, paint a little at a time. Third, after you add a coat, let it dry enough to open and slide the window. Repeat many times opening and closing as you paint. Then once you’ve added the last coat, open and close the window several more times. You may also want to get an alcohol-soaked cotton swab and clean the tracks. 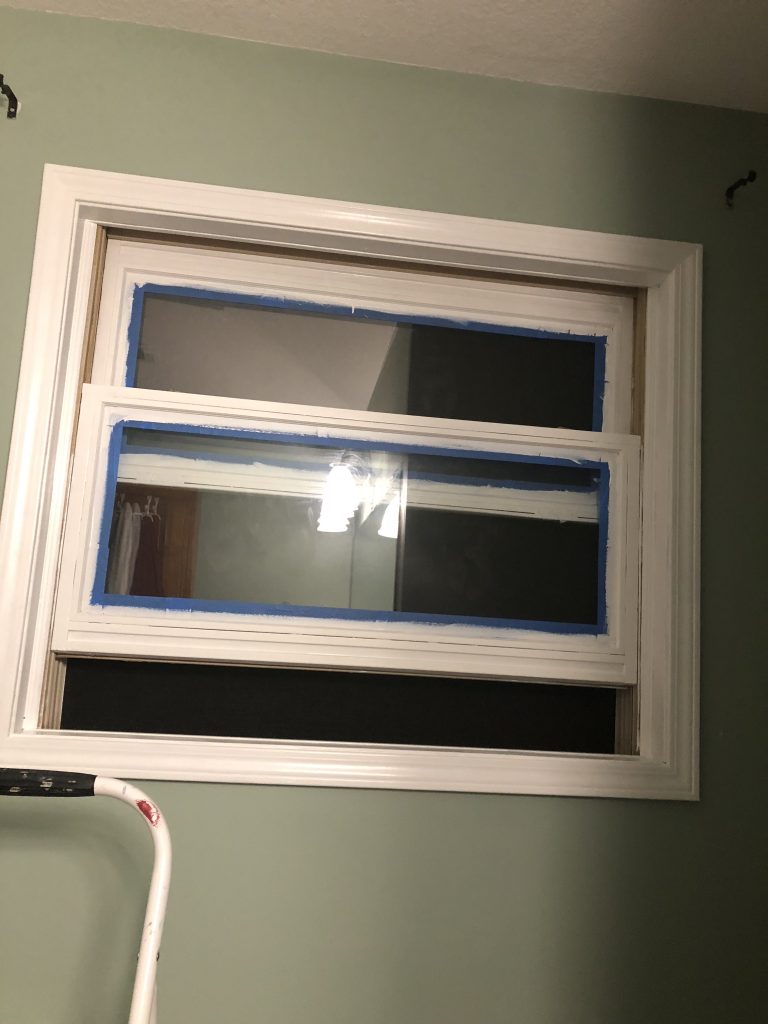 With the new light fixture, drawer pulls and faucets installed the bathroom looks amazing. A far cry from the mistreated builder oak we moved into. 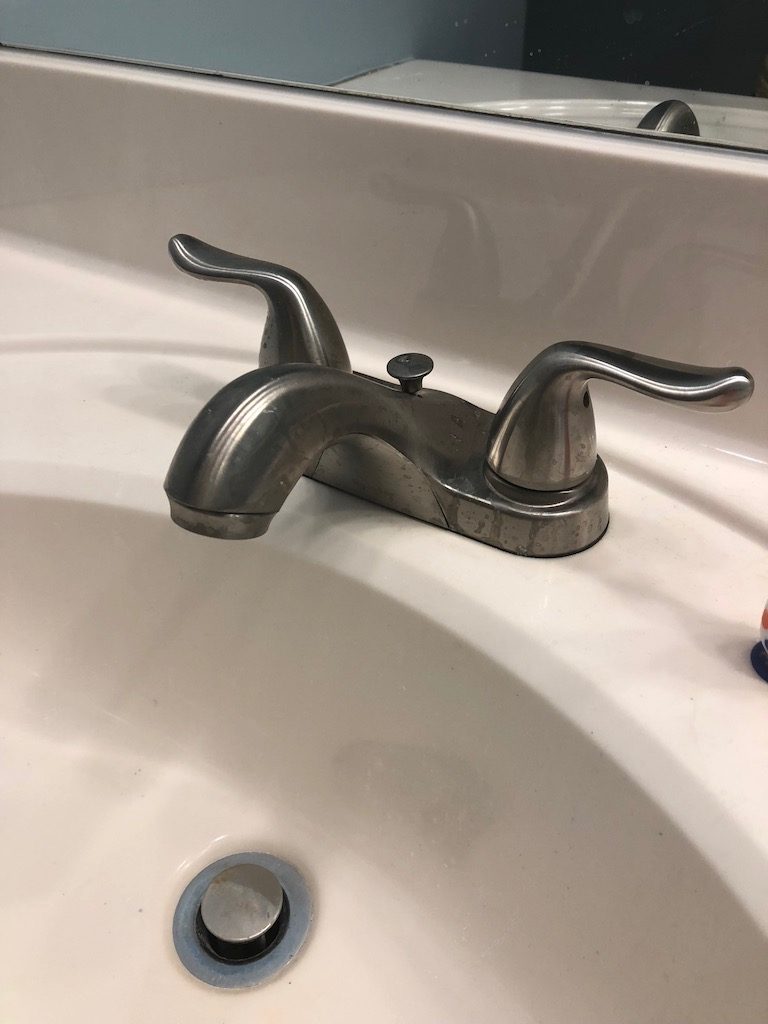 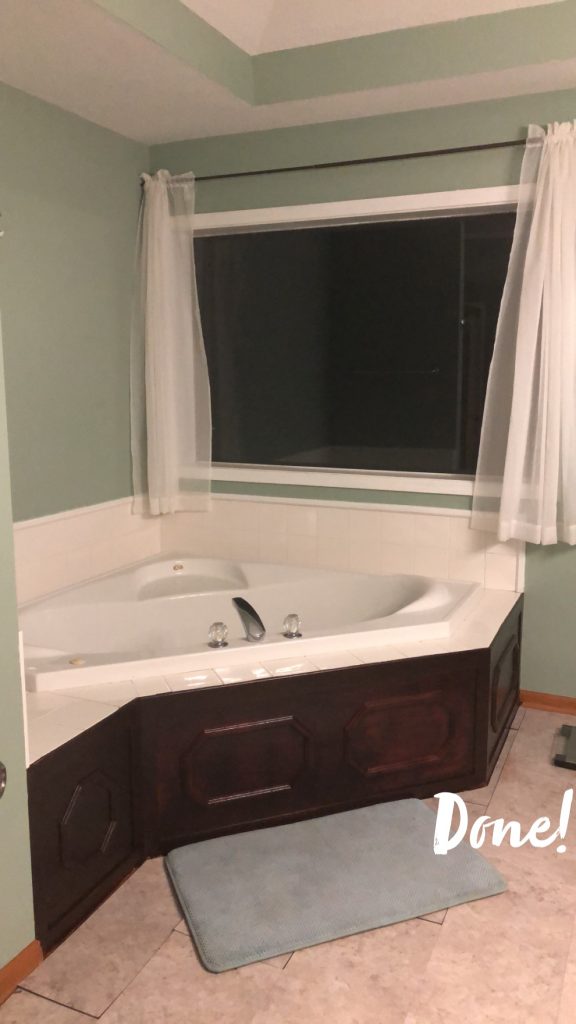 While we could have easily completed this project in a weekend, it ultimately took us about 15 days from start to finish. I can’t wait to get the mirror frame up, the floor done and the new shower glass installed.

Here are the side by side comparisons. 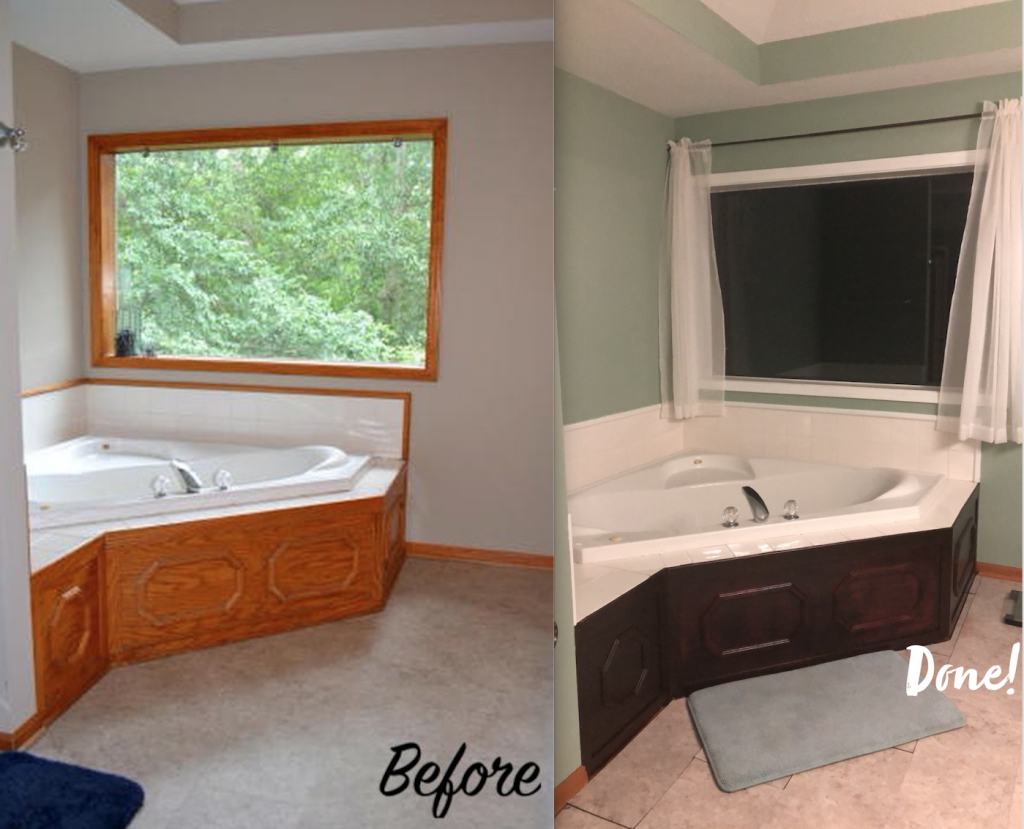 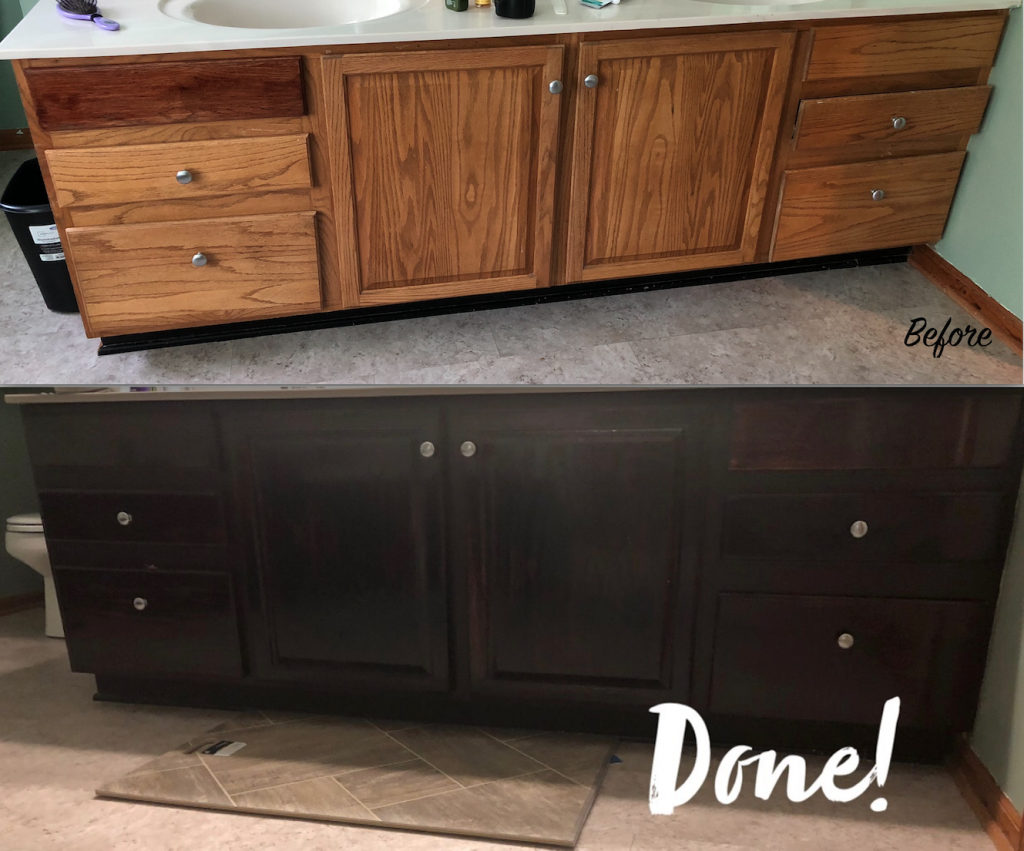